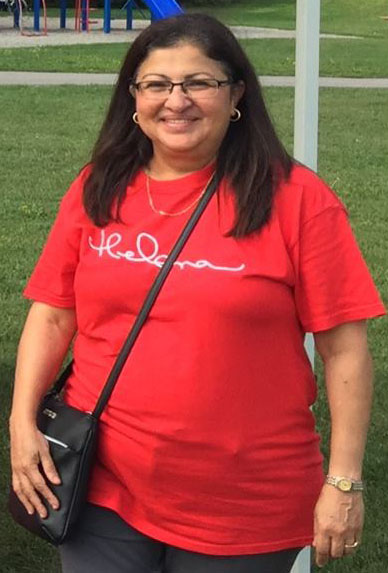 As the Chairperson for Canada’s recently appointed Women’s Cricket
Selection Panel, Fowzieh Yaqubian, along with her fellow Selectors,
Ontario’s Sutha Sivanantham and British Columbia’s Kim Coulter,
has been charged with the task of establishing procedures
for the continuous identification of talented players as
candidates for future selection to the Canadian national
women’s teams. Having played international cricket at
its highest possible level as a Test batter and wicketkeeper
for her native India, Fowzieh is impressively
qualified for her new found role.

Born and raised in Chennai, India, Fowzieh
became interested in cricket when she was
just about 13 years old. The England
Men’s cricket team had toured India
a couple of times in the early 1970’s
and she had gone to watch the Test
matches. In those days, there were
just two choices of either going
to the stadium and watching the
matches or listening to the cricket
commentary over the radio.
Having the privilege of watching
players such as the Nawab of
Pataudi, Gavaskar, Viswanath,
Venkat, Bedi, Alan Knott, Tony Greig,
et al really piqued Fowzieh’s interest
in cricket.

Buoyed by her interest, Fowzieh and
a few of her class mates started
playing cricket in their school. In those days, they received quite a bit of opposition
as cricket was not considered to be a game for
girls/women. Undaunted they, not only persisted but,
went even further serving as trail blazers in forming
two local club teams.

At the same time, in 1973, the first women’s World
Cup was held. Fun Fact – the first men’s world cup
was held a year later in 1974. Around that time, the
Women’s Cricket Association of India was established,
Women’s State Associations were also being formed
and the game gradually started taking root. Fowzieh
and her fellow female cricket enthusiasts started
attending newly established inter-state and interzonal
tournaments and eventually she was selected
to play for India as the opening batter and wicketkeeper.

Fowzieh says that the keys to her personal development
were perseverance, hard work and focus. She and
her teammates played simply because they loved the
game. They were not paid a penny and in fact, had
to spend their own money. Their travel was by the
cheapest means, they stayed right in stadium rooms
during coaching camps and for those who were in
school or university, their studies took second place.
They also scrambled to get grounds or nets where
they could practice.
So, they were giving up a lot to pursue their dreams,
not knowing what the future held, as women’s cricket
in India was in its infancy. They were also lucky to have
had coaches who believed in them and coached
them, once again, because of their own love for the
game. Moreover, despite the many hurdles faced,
Fowzieh and her teammates continued to persevere.

At first people would come to watch
them mainly because of the novelty
of women playing cricket. Those
who did, however, invariably left duly
impressed by the techniques and
cricketing abilities of Fowzieh and her
teammates.

India’s National Women’s Team
Selectors watched the performance
of players at the Inter State ‘National’
tournament and the Inter Zonal Rani
Jhansi tournament. The top 20 players
were chosen and sent to month long
coaching camps; and from there the
Indian team would be chosen.
Later on, many colleges and universities
also started forming women’s teams
and there were also local Inter-
University Tournaments. As such over
time more and more opportunities
were made available for Fowzieh and
her fellow women’s cricketers to showcase their talents.

Having immigrated to Canada in January 1983, Fowzieh was not immediately involved in women’s cricket. Her primary focus at the time was on her education, job and raising a family – she has two daughters. Cricket was understandably placed on the back burner for the time being. Also, at that time, there were no opportunities at all for Women’s cricket in Canada.

Along with her husband she still, however, actively followed the game. Her husband had also played first class cricket in Pakistan and in fact, was actively involved with the Canadian Cricket Association in the early 2000’s, even serving as the Manager for a Canada National team’s tour to Florida. They kept in touch and keenly followed the progress of the Canadian teams, watching their home games.

For Fowzieh and her fellow Canadian Women’s Selectors the immediate goal, which they hope to fulfill within their initial two year term, will be to identify talented players as candidates for selection to Canada’s national Women’s cricket team. They have also been charged with the sizeable dual responsibilities of maximizing Canada’s chances of winning each game and guaranteeing the long-term success of Canadian cricket.

Of course, the immediate challenge to the successful completion of their assigned objectives, is and will be the COVID19 pandemic and it’s continuing nationwide lock-down effects. Fowzieh and her panel are, however, hoping to be able to resume tournaments by spring/summer this year.
Canada’s established Women’s cricket selection qualification pathway requires players to participate in tournaments at various levels where selectors can observe them in action. Fowzieh readily acknowledges that being the first such Committee to be put in place, there will always be a learning curve. She and her fellow Committee Members are, however, all willing to learn and grow as opportunities present themselves.

As a means of fulfilling their objectives and overcoming any encountered challenges, Fowzieh and her Panel will be working with Cricket Canada’s Executives to develop alternative methodologies to ensure that the objectives laid down in the player selection policy are achieved. The need to grow the game and give players more opportunities to play matches where they can gain more experience and showcase their talents has already been identified as a primary priority for Fowzieh and her Canadian Women’s Selectors Panel.

Wickets Aiming For A Breakthrough 2021 Year!