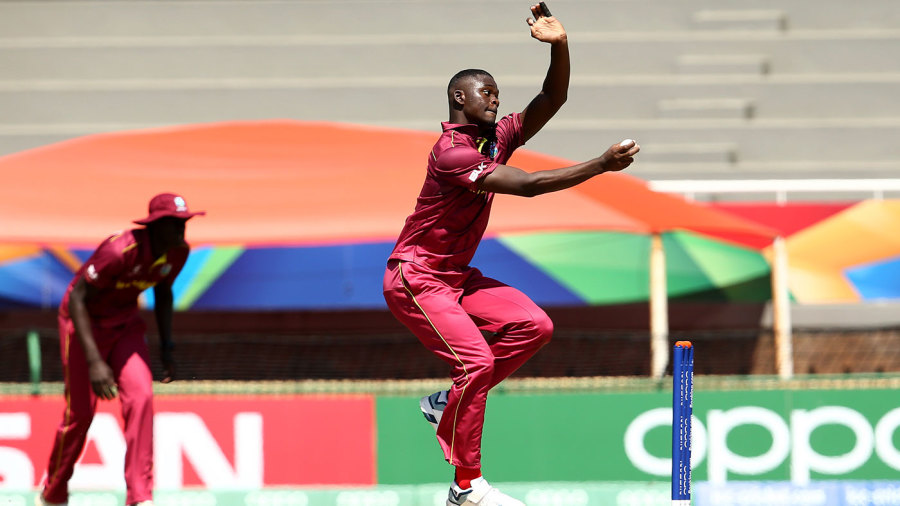 Having knocked on the West
Indies Selectors’ door with
his performances in both
the South Africa hosted ICC U19
World Cup as well as the recently
concluded 2020 Caribbean
Premier League, it appears as
though Jayden Seales’ requests
for attention have already been
answered! Seales was reportedly
shocked after receiving the Selectors’ call saying he had
been selected as a reserve for the upcoming West Indies
two-match Test series against New Zealand that bowls off
on December 3 in New Zealand.
Although he is still yet to play a First-Class match Seales, 19,
had an impressive showing at the ICC Under-19 2020 50-
over World Cup early this year which left many speaking
about his fast-bowling ability. Former West Indies fast
bowler Ian Bishop, who was a commentator during the
Under-19 World Cup, said during the tournament that
Seales should be included in the senior set-up.
Trinidadian Seales is among six reserves who will
travel to New Zealand at the end of October
with a 15-man Test squad captained by Jason
Holder. Joining Seales are fellow Trinidadian
Joshua Da Silva, Jamaican Nkrumah Bonner,
Grenadian Preston McSween and Barbadian
pair Shayne Moseley and Raymon Reifer.
Seales will get the opportunity to train
alongside the experienced fastbowling
pair of Kemar Roach and
Shannon Gabriel on tour. The
other fast bowlers making the trip
are Chemar Holder, Alzarri Joseph
and McSween (reserve).
Seales grabbed eight wickets in six
matches for the Trinbago Knight Riders in
the 2020 Hero CPL, held in Trinidad from
August 18-September 10. Seales was not
expecting the call-up because he has not
played any First-Class cricket yet.
“It so happened that they chose to carry me as a
reserve and as they say I am going as a developmental
player just to learn more, understand my game a little
more…very happy for the opportunity.”
Seales is eager to return with a “wealth of experience.”
The teenager is willing to learn from seasoned
campaigners Gabriel and Roach, who have 345 Test
wickets between them.
“For me, it is just to listen to how they speak about
certain things and watch how they carry about
themselves, whether it be in training, recovery (and)
during a game. Just to see how they operate and
their way of thinking, and just learn from it as much
as possible.”
Seales also has goals for the upcoming 2021 West
Indies Four-Day Championship, where he is expected
to feature. He is aiming to end the campaign
with 30 wickets if the tournament is played
in its entirety. Each of the six teams normally
plays ten matches, but the tournament is still
uncertain because of the covid19 pandemic.
Seales is part of a young exciting
fast-bowling crop in the region
currently, with the likes of Joseph
and Chemar also showing promise.
“I think the quality of fast bowling drastically improved
not only because of the pace that we acquire, but
the control that we have and we can swing the
ball in any conditions and the aggression. I think
the fast bowling in the Caribbean is definitely on
the rise and that is something definitely exciting
for myself and I know for the fans as well.”