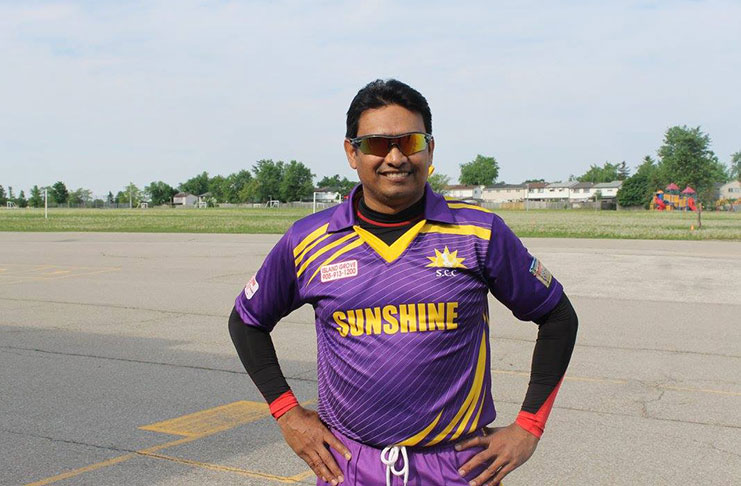 Mahendranauth “Bobby” Parasnauth remains one of the most sought-after softball players,
having donned colours for several teams both in his adopted country, Canada, New York and
his homeland of Guyana.
Parasnauth, who represented the triumphant Regal Masters in the Over-45 category in last
year’s Prime Minister T20 Softball Cup, has the unique distinction of being the only captain to
have won two Toronto Cups, the inaugural one in 2015 and also the third edition in 2019 while
being at the helm of Our Own in the over-40 category.
Of note is the fact that Our Own didn’t participate in the second tournament staged in 2017.
Parasnauth’s love for the game, as an all-rounder, moreso as
a top-flight bowler, never waned since taking up residence
in Toronto in 2003 as he continued to bamboozle batsmen
with his off-breaks bowled at breath-taking pace. He has
also been recording useful scores on the Canadian circuit.
Making his debut for the Dharam Persaud-led Ariel, one
of the leading teams in the then Guyana Softball Cricket
Association (GSCA) tournaments, in 1988-89, Parasnauth
made an immediate impact and was one of the most feared
bowlers on the local scene.
The East Coast-born Parasnauth is credited with being the
only all-rounder in Guyana to have scored a hundred and
captured five or more wickets in the same game: 107 not
out and six for 15 against Canal IX. He is also one of the
few all-rounders to have made a century in a competition
organized by the GSCA.
Parasnauth also has the unique and remarkable distinction
of grabbing hat-tricks twice in Inter-county tournaments
while representing Demerara, including an incredible
seven for seven against Essequibo, which remains his best
bowling figures to date.
Another astonishing feat was a helmet trick – all four
players bowled – against Banks DIH at Thirst Park, where
he finished with the remarkable figures of six for 11.

Since migrating to
Canada, Parasnauth has
continued where he left
off in Guyana, featuring
among the top bowlers
every year since here and
was the top bowler for
three consecutive years.
His 35 wickets in one
season still remain his
best.
Following his migration to Canada, it took Parasnauth 10
years before returning to the softball arena in Guyana in 2013
when he represented New York. He has been travelling to
Guyana ever since once there are international tournaments.
Meanwhile, Parasnauth is cautiously optimistic about
participating in tournaments this year but intends to adhere
to all the necessary health guidelines and precautions.
Apart from his feats on the softball field, Parasnauth can also
be deemed a humanitarian at heart, being a constant blood
donor and is challenging others to do likewise to save lives.
According to him, “this is serving a purpose and can one day
help you or a member of your family. I just did it and it felt
great.
“Giving blood is a great feeling. If we can regenerate pure
healthy blood cells so quickly then why not! Come on friends
this is my challenge to you.”