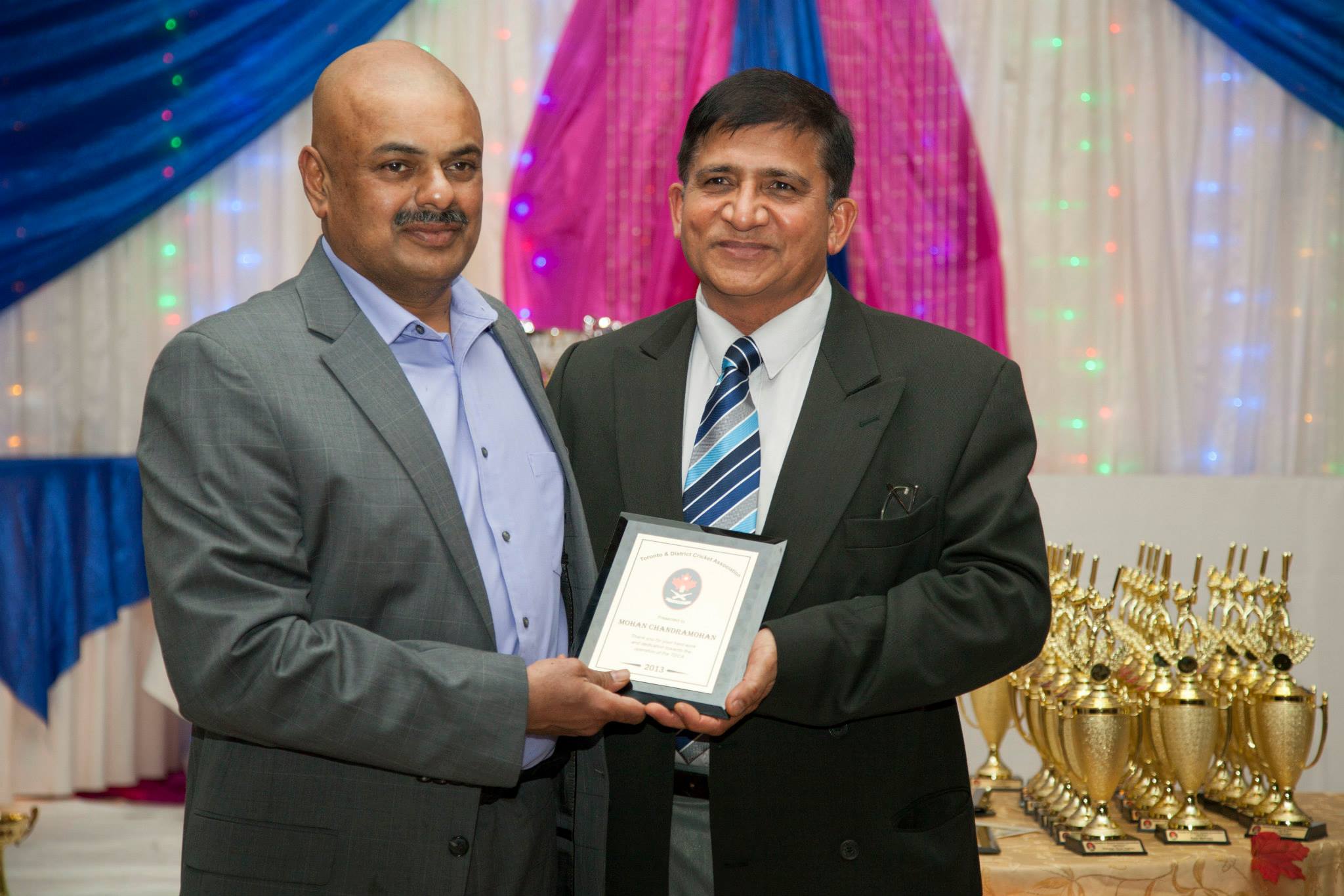 Mohan K Chandramohan, aka Mohan, was born in Jaffna, a city located in the northern part of the beautiful island country of Sri Lanka, often referred to as the Pearl of the Indian Ocean.
The ‘80s were difficult times for the peace-loving people of Sri Lanka. A brutal civil war left the country ripped and bleeding. Around this time, Chandramohan moved to the US to pursue his electrical engineering degree at Texas A&M University. Canada followed six years later, in 1986. Since then, there has been no looking back for Chandramohan, ex-President of Maple Leaf Cricket Club, King City, Ontario and owner of SMC Infotech. Just past its golden jubilee year, the legendary club has many golden moments. In 2006, it became the second ground in Canada to host One Day Internationals. Later, in May 2018, it was the official host for all the matches in the inaugural edition of the Global T20 Canada tournament.
“It’s the best country in the world,” comments Chadramohan about Canada with satisfaction written on his face. It is thirty-four years now since he is a resident in North America. It has been a long haul for Chandramohan. From a tropical climate in Sri Lanka to Canada’s freezing winters, Mohan took some time to adjust to Canada’s weather and culture. “It was the best decision to come to Canada,” affirms Chandramohan, who was initially all set to settle in the US with a Green Card but changed his mind at the last minute.
Like all other British colonies, Sri Lanka is one of the countries that has taken to the game of cricket like naturals. It is a small surprise that Chandramohan carried his love for this bat and ball sport to Canada. In 1987, Mohan and a group of his friends joined to form a club. In 1987, they entered the Commonwealth League as the Toronto Campus Sports
Club and then applied ticket into T&D as the Centurions Cricket Club, getting accepted in 1988. Since then, they never had to look back.
Mohan’s club was the first to win three championships in a row to go straight to Premier, where it stayed for two years. It played First Division for three years and from Premier moved to Elite and Super Elite.Chandramohan’s devotion to cricket did not go unnoticed. In due course
of time, he went to become the President of the Maple Leaf Cricket Club
(MLCC). Mohan remained in office for three years. Currently, he is in charge
of the Maple Leaf Club and a Board member in the Toronto & District
Cricket Association (TDCA). In 2013, TDCA felicitated Chandramohan with
the coveted TDCA Board Member Excellence Award for his outstanding
contribution to Canadian cricket and a dedicated volunteer member
of the Toronto & District Cricket Association.
Power brings responsibilities. When the Global T20 was announced
in 2018 during Chandramohan’s tenure as MLCC President, with just
two months in hand, it looked a daunting task. Besides a fair
degree of skepticism, many loose ends had to bet tied, which
included training staff, logistics, infrastructure and so on. Most
important was to make the grounds match ICC’s standards.
Even with fund constraint, by dint of his sheer determination,
Chandramohan accomplished all of these.

There is high energy when a group of people with similar
interests gets together to work toward the same goals.
Mohammed Rashid Shaikh, President of Toronto & District
Cricket Association, accompanied by Farhan Khan, Vice
President, came forward to join Chandramohan in this
mission. They were the three key people interfacing with
ICC.
“After the first match, we knew we could do it. Till the time,
the first ball did not roll; we were biting our fingernails,”
Chandramohan jokes.
That the first league got off the ground was quite a
remarkable achievement, but the challenges did not end
there. Season 2 of the GT20 had to be shifted to Brampton’s
CAA Centre as the ICC demanded private grounds for the
league matches. It was not easy to accomplish this. The
scorching summer weather was a constraint. Besides,
reserving the King City ground exclusively for GT20 was
not feasible as other players participating in other league
matches needed slots to practice and play.
Despite being former Dominions of the British Empire, cricket
is still not a major sport in Canada. “Playing cricket for
Canada is always a struggle. The player has to work to earn
a living, and thus, cricket goes down in priority,” observes
Chandramohan. With hope in his eyes, he continues, “GT20
is helping cricket in Canada. The Global T20 is beneficial for
this country, and it will hopefully inject life into the sport of
cricket. It’s a plus for Canadian cricketers, playing alongside
professional players like Smith, Warner, Gayle, Yuvraj Singh
and other biggies. The Canadian cricketers will be looking to
impress cricket officials as it could lead to getting contracts
in bigger leagues like the CPL, BPL and IPL. These players alsoget a chance to be mentored by these legendary cricketers.”
International Player’s presence in GT20 has made people recognize cricket as a mainstream sport. Season 2 saw a
surge in viewership of 12 times more viewers from the Season 1 opening match compared to viewers worldwide in
Season 2’s opening match. At the same time, gallery attendance reached almost full-house in the 5,000-seat stadium.
People who could not make it to the stadium took time off to watch the games on Hotstar and Star television.
Victory smiles on the most persevering, and the credit for the success of GT20 goes to Chandramohan’s team of
committed warriors. “We were so happy that we could complete the tournament successfully without any major
issues. We never had any tournament in Canada like that in a long time”,
Chandramohan reminisces.
Maple Leaf has always had excellent relations with the past
and present leadership in Cricket Canada. Yet, there are areas
of concern and aspiration to match international standards.
Several aspects, like better pitches, drainage system,
games room, washrooms, parking lot, and public transport
availability, need immediate improvement.
Cricket without spectators in the ground might have been
unimaginable till a few months back. It is a reality
now due to the health protocols that are in place
to counter the Coronavirus pandemic. The New
Normal is going to take time for players to adjust,
feels Chandramohan. The lockdown is also
going to hurt the Canadian players the most.
The players are dependent on tournaments
in the summer months, but with no matches
now, they have only been training and
warming the benches. Even the star event,
GT20 Season 3, stands cancelled, causing
disappointment to many.
It has been a good life, admits Chandramohan.
He is always focused on his family, followed
by work and his passion, which is cricket.
“My family is a circle of the strength of love
from my wife and daughter. They make my
life much easier,” shares Mohan.
“The greater the obstacle, the more glory is in
overcoming it.” Chandramohan is optimistic
about the Canadian national team regaining
the ODI status and also qualify in the world
Cup.
“We are working hard to popularize the game
in North America, and I dream seeing Cricket
Canada on the global map,” concludes the
committed lieutenant of cricket who has
dedicated his life to the sport.

The Importance Of Mentors!

Up Close Take 20 With Achini Perera!