Eventually needing to win their final match by a margin of at least 44 runs to attain ICC ODI qualification status, Canada fell heartbreakingly short of its target by just four runs. The Canadians defeated their US archrivals by 40 runs but in doing so failed to restrict their opponents to the required target score of 211 or less.

That equation had materialized after Papua New Guinea’s surprising win against Tournament leaders Oman had elevated them to four points and a net run rate of –0.40 which was eventually comparatively superior to Canada’s –0.41. The result meant a fourth place finish and ODI qualification for Papua New Guinea while Canada were fifth in the six-team tournament.

Having been sent in to bat the Canadians got off to a disastrous start, losing wickets in the first, Thomas (0) and third over (Wijeyeratne 2) to be at 6-2 after the first four overs. Navneet Dhaliwal and Nitish Kumar restored order for the Canadians, adding 125 off 28 overs for the third wicket. Kumar fell, caught by Gore off the bowling of Taylor for a well-played 58.

Canada’s captain Davy Jacobs promoting himself to number five in the order, joined Dhaliwal in adding 98 valuable runs for the fourth wicket before falling to Ali Khan for 57 in the 48th over, his third half century of the competition. At the other end, Dhaliwal had batted his way to become the Canadians first centurion of the Tournament.

Dhaliwal remained unbeaten on 121, made off 125 balls with three sixes and six fours, as Canada closed its 50 overs on 255/4. For the USA, Ali Khan was yet again the pick of the bowlers capturing 3-65 off his 10 allocated overs.

Set to make 256 for victory, USA suffered an early loss of the important wicket of their previous round centurion Xavier Marshall. He was adjudged lbw to Eranga for 7 off the very last ball of the first over. The USA was then 8-1.

The USA lost its second wicket via the run out route when Patel having scored 25, failed to make his ground. Taylor and Malhotra then added 60 for the fourth wicket before a terrible mix up resulted in both batsmen being in the same crease and Taylor having to go run out for 44. After 30 overs the USA were 125-3, still needing another 130 from its remaining 20 overs.

Wickets then fell at regular intervals as the Canadians tried desperately to dismiss their USA opponents for under 211. Romesh Eranga 4-44 (10) and Saad Bin Safar 2-45 were the best of the Canadian bowlers. For the USA Jaskaran Malhotra 50 and Stephen Taylor 44 were the top scorers.

The Canadians had put themselves in with a qualification chance from their final match after having scraped home in their fourth round encounter against Papua New Guinea (PNG). Having restricted their opponents to a very modest 154 all out off 44 overs, thanks largely to Dillion Heliger’s 4-41 (9.2 overs), the Canadians were at one point struggling at 77-6 and in danger of losing the match. Skipper Davy Jacobs however then came to the rescue, stroking an unbeaten 62 off just 69 balls to see his team home to a three-wicket victory with 14.4 overs to spare.

Canada’s had also gotten off to the worst possible start in the Namibia hosted 2019 International Cricket Council (ICC) World Cricket League Division II. The Canadians lost each and every one of their matches in the first three rounds of the Competition, which Cricket Canada President, Ranjit Saini, had earlier described as “the most significant Tournament of our lives!”

In their April 20 Tournament opener, the Canadians despite a belligerent 53 ball 52 not out from their captain Davy Jacobs and supportive forties from Navneet Dhaliwal (44) and Srimantha Wijeyeratne (44), only managed to post a relatively modest total of 222-8 off their allocated 50 Overs. That proved to be an easily overcome challenge for Hong Kong. A superb 114 not out by their captain Ansuman Roth, led Hong Kong to 223/3 off 47,2. Victory comfortably secured with 16 balls to spare. Bowling for the Canadians Nikhil Dutta claimed 2-30 off his 10 allocated overs. 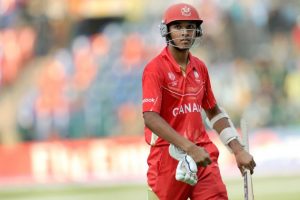 In their second encounter against Oman, the Canadians were again badly let down by their apparently inconsistent batting. Having been sent in to bat by Canada, Oman thanks to a Zeeshan Maqsood century, 109 made off just 102 balls, and Aqib Illyas’ 100 ball 86, posted a challenging 285/7 off its 50 overs. For Canada Galkandage Eranga 3-57 off 10 was the pick of the bowlers, while Nitish Kumar chipped in with 2-45 off 7.

Chasing a victory target of 286 at a required run rate of 5.72 the Canadians were always behind, losing key wickets regularly and eventually being bowled out for 186 in the 44th over. Oman won by 99 runs. Nitish Kumar’s 57 was the Canadian’s top score.

In their 3rd round encounter against hosts Namibia, the Canadians batting failed to click yet again. Batting first after being sent in, Namibia scored 258-6 off its 50 overs. Stefaan Bard scored 90 while opening the batting and Craig Williams hit a belligerent 65 off only 59 balls. For the Canadians, Saad Bin Zafar (2-32) and Nikhail Dutta each claimed two wickets from their 10 overs. Chasing a relatively modest victory target of 259 off 5o overs the Canadians were never really in the hunt. Again losing key wickets at regular intervals and eventually being dismissed for 160 off 42.1 overs.  Dillon Heyliger’s 32 ball 29 was the Canadians top score.

The Tournament’s top four successful teams, Oman, Namibia, the USA and Papua New Guinea have earned ODI status. They will now join Scotland, Nepal and United Arab Emirates in the ICC’s League 1, which is just two steps away from qualification to the 2023 World Cup.

The Canadians are being led by former South Africa wicketkeeper/batsman Davy Jacobs. His wealth of experience and former representation for South Africa was expected to bring a new dimension to Canada’s cricket and to inspire them to dominate proceedings on the African soil. Canada last featured in the ICC World Cup in 2011, 2007 and 2003, but missed out in 2015 having relegated to Division 5 owing to some poor performances at the Qualifying stage