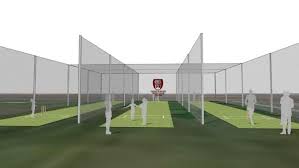 Cricket players in northeast Calgary could
soon have their first batting nets in that part
of the city.
Right now players have to travel to Riley Park or
Inland Athletic Park, both in northwest Calgary, to
play and practice.
Batting nets allow bowlers and batsmen to practise
within the confines of a narrow, netted lane without
having to chase cricket balls around a pitch. They’re
a vital part of practice and warming up properly
before matches.
The single batting net at Riley Park is several decades
old. There are two other nets at Inland Athletic Park,
and only five or six places to play cricket across the
entire city.
The sport is especially popular in Calgary’s South
Asian community.
A new facility with three new practice nets at
Westwinds cricket ground in the northeast, where
New Cricket Facility Planned For
Northeast Calgary!
most players live, would make it easier for more
players to practise closer to home.
It would also benefit young players and kids in
northeast communities who can’t travel far but want
to try the sport.
“This is going to be the first of its kind in the northeast
area, which would be accessible to any Calgarian,”
said Sabeel Khan, president of the Calgary and
District Cricket League.
The league has been active in Calgary for more than
100 years and currently has more than 1,000 players.
President of the Calgary and District Cricket League
Sabeel Khan says he hopes the project can be funded
with some help from the provincial government as
well as donations from cricket players in Calgary.
(Submitted by Sabeel Khan)
“It would immensely help bring up the quality of
cricket in the city,” said Khan. “If you have three nets
available at any time of day, anyone can grab a partner
and come and use it. This would provide a much needed
facility for our city.”
The organization says it has received conditional
approval from the City of Calgary to proceed with
phase one of the project at Westwinds.
The league is hoping to raise funds from the provincial
government and donations and contributions from
sponsors and members. The cost of the project is
around $65,000.
“We’ve requested the provincial government fund a
portion of the project and we’ve applied for that,”
said Khan. “The remaining portion would be raised
Page: 10
through sponsors, well wishers and cricket lovers in
the city. There’s a campaign that’s going to be running
soon.”
The project is welcome news to players of all levels who
have been used to making do with no new facilities for
years.
“I’d always wondered, with the amount of people who
play in the northeast, why we don’t have more cricket
grounds and facilities like practice nets,” said cricketer
Hamza Tariq, who has played for Canada’s national
team.
“It could be people my age or young kids picking up
the sport. It’s going to be great for everyone in the
northeast community,” said Tariq.
Omaima Waqar is vice-president of the Alberta
Women’s Cricket League. She says the project will
allow women who can’t travel to other facilities a
chance to practice and play. (Dan McGarvey/CBC)
Others say it will help improve the women’s game
and help more women try the sport.
“We’ll have more places to practiSe and these are
the first nets in the northeast, where a lot of women
and other players live,” said Omaima Waqar.
“The nets are crucial to improving your cricket
because rather than going on a pitch and playing,
spending time collecting balls and having enough
fielders to help practise, in nets you just need two
people,” said Waqar.
“You can do that for hours,” she said.
Construction could start by late spring with the
nets open for use by summer.
Once phase one at Westwinds is complete, the
league has plans for a clubhouse.
Source: https://www.cbc.ca/news/canada/calgary/
author/dan-mcgarvey