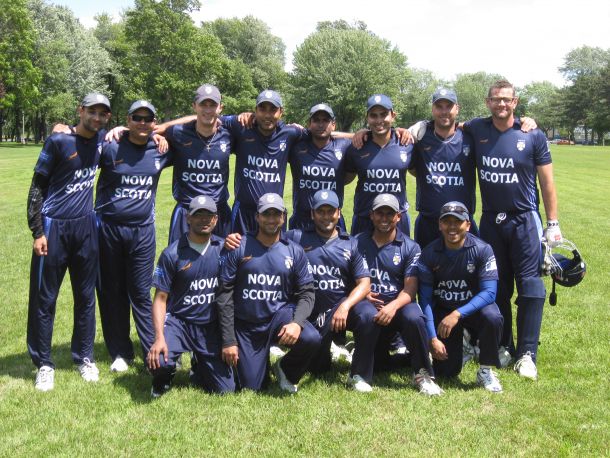 Nova Scotia Cricket Association is the sport governing body of cricket in the Province of Nova Scotia in Canada, and is an affiliate of Sport Nova Scotia and Cricket Canada.The Halifax Cricket League is currently 4 teams strong, with the fourth team being introduced due to increasing demand of membership numbers in Halifax prior to the 2013 season and as many as 80 players registered in the League.

In the Annapolis Valley region of the Province cricket sprung to life in 2012 due to the efforts of committed and determined local volunteers looking to grow a membership base for social and recreational cricket. With this came the establishment of the Annapolis County Cricket Club in early 2013 based in Annapolis Royal, and became an affiliate of the NSCA in early 2014.

In recent times the Nova Scotia Cricket Association has increased efforts to develop initiatives for building junior cricket. With the distinct lack of a junior cricket structure in Halifax all of these years the need was recognized more than ever to foster the growth of kids cricket from the ground up and gather more interest from youngsters in the schools. Heavy focus has been given to visiting schools and introducing more Nova Scotian children to the cricket, while also providing their school with equipment sets and educating PE teachers about the sport.

At the Senior level the Nova Scotia men's provincial team participates in two annual inter-provincial competitions every summer season. Firstly, the Eastern T20 (Eastern Canadian T20 Championships), and secondly, the Maritime Challenge Cup which is currently contested between Nova Scotia and its neighbour and traditional rival New Brunswick with an annual series.

The "Eastern T20" is an inter-provincial tournament which brings together the men's provincial teams from Quebec, Nova Scotia, New Brunswick, Prince Edward Island and Newfoundland & Labrador. This Twenty20 format cricket competition formerly known as "Atlantic T20" until 2014, and known as "Maritime T20" from its inception in 2008 until 2011, is contested annually and hosted rotationally between the competing provincial organisations.