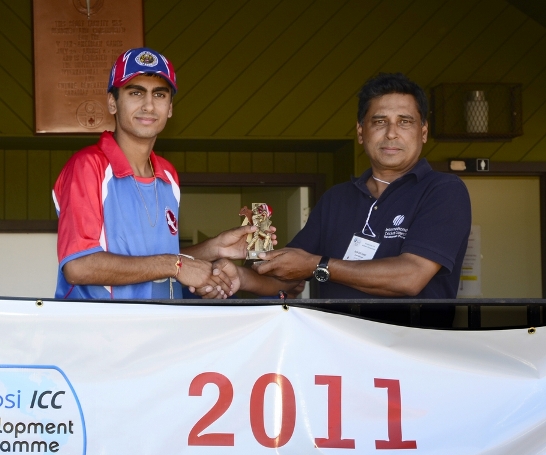 Ron Oumadat Dipchand’s journey to his present position as Cricket Canada’s National Chairman of Selections is as impressive as it is lengthy! The former Executive Director and Head Coach of the Manitoba Cricket Association first came to cricket prominence during his teenaged days as a student at the Cornelia Ida School, West Coast Demerara, Guyana.
As a fifteen year old Dipchand was appointed as captain of the West Demerara U16 team for the National School Cricket Championship Semi Finals versus East Bank Demerara at Lenora Cricket Park. He scored 66 runs.
Dipchand’s cricket career ultimately took flight when in 1974 he started attending Georgetown’s Central High School. Playing for Central High School in the Senior National 2nd Division Northcote Competition, he scored 715 runs, including 3 centuries and 4 fifties, enroute to winning the Competition’s batting trophy.(Publisher’s note as a 16 year old medium pacer bowler).
Dipchand’s outstanding achievements deservedly captured the attention of Guyana’s national Youth Selectors, resulting in his inclusion to the Squad for home hosted 1974 West Indies Benson & Hedges Under 19 Championship in Guyana. He had scores of 18 against the Combined Islands, as well as 29 and 19 against Trinidad.
Dipchand subsequently went on to play Guyana First Division Cricket for the Gandhi Youth Organization, scoring 3 centuries and 8 fifties in a career that lasted approximately three years. During that period he also represented Demerara in the National 60 over Inter county Championships against Berbice and in 1977 was also called to Trials for selection to the Guyana National Shell Shield Team.
Having immigrated to Manitoba where he obtained a certificate in Sports Management Skills from the Provincial Institute, Dipchand also very quickly became involved in Manitoba Cricket. As a Player and Captain he led his teams to numerous Provincial Championships and himself captured several awards for outstanding performances. He was a 9 Time winner of the League’s batting Trophy. He also won the Bowling Trophy three times and was thrice awarded as the Provincial League’s Most Valuable Player.
Not surprisingly Dipchand was also eventually selected to the Canadian National Senior Team. During an eleven year (1980-1990) career as a Canadian National Player, Ron Dipchand scored two centuries and eleven fifties.
In 1986 midway during his career as a Canadian National Senior team player, Ron Dipchand started taking Coach Courses. That year he completed a 6 week apprentice coach training under Khan Mohammed, Pakistan National Coach that was conducted in Winnipeg, Manitoba. Over the next eight years, from 1986 – 2014, Dipchand enrolled in a variety of Coaching Courses which eventually led to his certification as an ICC Level I Conductor.
Upon the completion of his playing days, Ron Dipchand fulfilled countless coaching duties, at the Provincial, National and International levels. He repeatedly served as the Canadian National U19 Head Coach for Team Canada’s participation at various international Tournaments and ICC World Cups.
Ron Dipchand’s first appointment as a Canadian national Selector was in 1991 when he was appointed to the Cricket Canada’s Junior Selection Panel. Having served on the Panel in the three subsequent years, he was appointed as its Chairman in 2004. He held that position until 2013 at which time he was invited to become a member of the National Senior Team Selection Panel, the Chairmanship of which he now holds.
In addition to his length list of academic and coaching certificates Ron Dipchand is also the holder of three prestigious Awards. In 1984 he was named as a Recipient of the Manitoba Cricket Association “Contribution to Cricket Award”; In the following year, 1985, he became a Recipient of CKY Sports Star Award and in 1994 he was honoured to receive the “Jack Kyle Cricket Canada Development Award”.