England have deferred the question of whether Jofra Archer will make their World Cup squad after naming an unchanged 15 for the ICC’s preliminary deadline. Archer is set to make his England debut, however, after being included for next month’s ODI in Ireland and a T20I and five ODIs against Pakistan, potentially giving him seven outings to make his case.

Chris Jordan, Archer’s Sussex team-mate, is the other extra member in the expanded 17-man squad ODI to play Pakistan, having maintained a late push for World Cup consideration with his T20I performances in the Caribbean last month, despite last playing a 50-over international in 2016.

Joe Denly, whose last ODI appearance came in 2009, keeps his place as back-up spinning all rounder ahead of Liam Dawson, although he could be among a small number of players, including Liam Plunkett and Tom Curran, who will feel the pressure if Archer performs well over the next few weeks..

The potential inclusion of Archer, the Barbados-born all rounder who qualified to represent England last month, has been the subject of much debate among the squad’s incumbent fast bowlers, but the decision by national selector Ed Smith will ensure peace for now, as well as setting up what is effectively a World Cup play-off for the last bowling spot.

Those players selected by England who are currently at the IPL will be required to return by April 26. The final date for the World Cup squad to be confirmed is May 23. 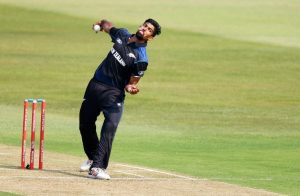 Ish Sodhi and Tom Blundell have claimed the two uncertain spots in New Zealand’s World Cup squad with the 15 names having been confirmed in Christchurch on April 3.

The roles of second spinner and reserve keeper had the most debate attached to them with Sodhi being preferred to fellow leg spinner Todd Astle and Blundell, who is uncapped in ODIs, earning a late call-up following an injury to Tim Seifert.

The rest of the squad, the first for the ten competing nations to be confirmed, is very much as expected with the shape of the World Cup party having largely taken shape since Gary Stead took over from Mike Hesson as coach.

Colin Munro keeps his place although is likely to find himself as the reserve batsman with Henry Nicholls slated to open alongside Martin Guptill. Jimmy Neesham and Colin de Grandhomme have taken the seam-bowling allrounder spots with Mitchell Santner, who has recovered from knee surgery, set to be the main spinner.

The squad will have a series of two-day training camps in Christchurch later in April before heading to Australia for a trip that includes three unofficial one-day matches. A large number of the World Cup squad won’t be present for that tour as they are at the IPL so a collection of reserve players will be included.