Despite the presence of three former international Captains in their squad, West Indies’Darren Sammy, Australia’s Steve Smith and Pakistan’s Kamran Akmal, as well as the current IPl stalwart, the hard-hitting batsman, useful part-time bowler and outstanding fielder Kieron Pollard, the Toronto Nationals failed to fire in its Global T20 Inaugural Season. The Nationals lost four of the six matches played and failed to even make the playoffs.

In the bowling department Pollard emerges as the Toronto Nationals highest wicket-taker. His five wickets were taken at an average of 25.6 and a 6.4 economy rate. Jamaica’s Kesrick Williams was National next highest wicket taker with four scalps captured at a 47.75 average and a 10.05 economy rate.

Kumar played six matches batted five times and scored an aggregate 102 runs at an average of 20.4. His strike rate was an impressive 150. He registered one fifty (55) in his five knocks. 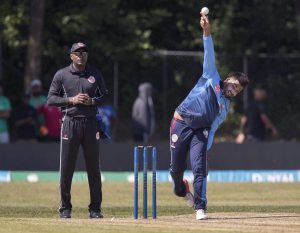 Nikhil Dutta appeared in four of the Royal’s matches but only had two chances at bat, scoring a paltry total of nine runs at a strike rate of 60.

In the solitary match he played Umair Ghani’s three wicket less overs cost 40 runs at a whopping economy rate of 13.33