Cricket at the Toronto Cricket Skating and Curling Club (TCSCC) dates back to 1827 and has continued with a long tradition of distinction in the sport. The Club boasts one of the finest cricket pitches in North America.

From May to September, TCSCC’s cricket players, from the beginner to the competitive athlete, have the opportunity to participate in its outdoor cricket program. Competitive players train indoors during the off-season.

The Club also offers a “Stragglers” program for those who still enjoy playing a competitive match against visiting teams and touring sides. Cricket is one of TCSCC’s founding sports and remains a dynamic and challenging program at the Cricket Club.

The years 1956 and 1957 were exciting for many Toronto sports enthusiasts. In 1956, amalgamation of the old Toronto Cricket Club and the Toronto Skating Club took place, followed in 1957 by the inclusion of the Toronto Curling Club. It was such a brilliant and sensible thing to happen and was the result of a process that began in 1954.

All three clubs, which eventually became the Toronto Cricket Skating and Curling Club, faced problems of being seasonal. Each had bought property, erected a clubhouse, and constructed playing surfaces. In every case, the large capital expenditure was fully utilized for only six months of the year. The Toronto Cricket Club had a large land area for expansion, but limited operating capital. The Toronto Skating Club had capital but no space for expansion.

The Toronto Skating Club, at 568 Dupont Street, needed space for training skaters as well as rehearsal space for its popular revenue-raising carnivals. In this post-war period, the popularity of professional ice shows and the construction of free, outdoor skating rinks meant a major reduction in revenue. Moreover, most of its members now lived north of St. Clair Avenue.

The Toronto Cricket Club at its Armour Heights property was facing its own problems. With little or no support in the public school system, cricket was not a popular sport in Canada. Only those few schools associated with the Anglican Church of Canada fielded teams and, even there, the shortening of the school year from September to May had an impact on the sport.

Thus, the Toronto Cricket Club could not attain and sustain a membership sufficiently large to cover its annual expenses. During its leanest years it survived by selling off lots on the periphery of its Wilson Avenue property including lots to the east which fronted on Saunders Street, named after Dyce Saunders, a club member in the late 19th century.

At the same time, the Toronto Curling Club was facing expropriation of its clubhouse and property on Huron Street by the University of Toronto.

The three clubs had their problems but each also had assets.

The skating club owned valuable midtown property and had a substantial bank account from its early successful carnivals. The cricket club sat on ten acres of land. The curling club also owned a valuable property that would bring a considerable price from the university and, as well, it had a sizable bank balance.

Thus, there was sufficient enthusiasm for amalgamation. By joining forces, a new club could remain open year-round, avoid staff layoffs and offer members an expanded repertoire of sporting and socializing activities.

A committee was struck with J.A. (Sandy) McKechnie, a member of the Toronto Skating Club, and eight men representing both clubs. The committee worked for almost a year to put together an amalgamation proposal.

During this time, legal counsel was working to sort out the myriad legal issues involved in the amalgamation of three historic clubs.

On March 12, 1956, at a meeting of the Toronto Skating Club held at the Royal Ontario Museum, a majority of members voted overwhelmingly for amalgamation. Special general meetings of the Toronto cricket Club took place in June and October, 1956. 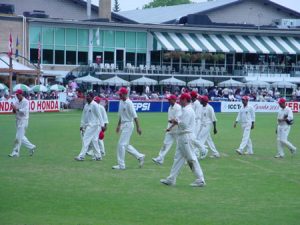 On Monday, June 18, 1956, all eyes were on a 25-cent coin as it was tossed in the air to determine whether the word “cricket” or “skating” would come first in the name of a proposed new club. On that historic evening, J.L. Bonus, second vice-president of the Toronto Cricket Club, tossed the coin. F.J. Boland, president of the Toronto Skating Club, called “heads” but lost the toss, and the newly amalgamated club became known as the Toronto Cricket and Skating Club.

The coin used in the toss is in the Club’s archives, still carefully taped to a yellowing piece of paper on which is typed the account of its historic role.

In April 1957, the membership of the newly merged club voted unanimously to expand the recent merger by adding the third club, the Toronto Curling Club. Its name was affixed to the end of the new club’s name making it the Toronto Cricket Skating and Curling Club.

At amalgamation, new club members were anxious to preserve and nurture the qualities that had shaped each of the three entities into strong, dedicated communities. Considerable care and activity went into ensuring that the club partners enjoyed equal participation. For example, the presidency of the new club was rotated between members of the original three for the first three years. Measures such as this helped to weave three different groups into a unified and active organization.

Today the Toronto Cricket Skating and Curling Club continues to serve as a vital community for individuals, families and sports enthusiasts.

In the 60 years since amalgamation, the Club’s membership has nearly doubled, and the regulations and facilities have evolved to meet the changing tastes of each generation. What hasn’t changed is the original vision and pursuit of excellence that was at the heart of the Toronto Cricket Skating and Curling Club in 1957. The Toronto Cricket Skating and Curling Club fields competitive teams in the Toronto & District Cricket League.