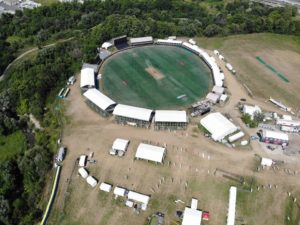 Brampton will build a new state-of-the-art cricket stadium. The realization that the country needs a world-class facility was driven home during the second Global T20 League that ended on Sunday with Winnipeg Hawks stunning Vancouver Knights in the final before a record crowd of 6,000 at the CAA Centre in Brampton. Among the superstars in the six-team league that was played over 21/2-weeks were India’s Yuvraj Singh, Pakistan’s Shahid Afridi, West Indians Chris Gayle, Andre Russell and Sunil Narine and South Africa’s World Cup skipper Faf du Plessis. The other marquee player who added a curiosity factor to the tournament was Mohammad Irfan, who at 7-foot-1 is the world’s tallest cricketer. The Pakistani fast bowler, who suited up for Winnipeg, thrilled fans with his bouncers and had the batsmen on their toes with his deliveries that were clocked in and around 140 km/h.

With turf transported from Indianapolis for a new wicket and a plush new field laid out in less than three months at a cost of $3 million (U.S.), Gurmeet Singh, owner and CEO of Bombay Sports Club of the GT20 League said these annual costs could be utilized in other areas if a stadium is built as soon as possible. It didn’t take Patrick Brown, the Mayor of Brampton, long to step in.

“With the ever-changing demographics of our city and with the enthusiasm I have seen during this tournament we have decided Brampton will be the capital of cricket in Canada,’’ he told The Sun. “I was elated when the organizers approached our council last year with a proposal to host the tournament here and we pushed aggressively for it as players such as Yuvraj, Gayle and Shahid Afridi are such big role models for our youngsters. The game is growing rapidly and since most of the recent immigrants come from countries where the game is the main sport, it’s time for the players to get a world-class stadium in our city.”

Brown wasn’t willing to divulge the cost, seating capacity or where the world-class facility would be erected. But The Sun learned it will be built in Meadows Gore in the north end of the city where there’s already a massive community centre. Brown added the stadium will be “built fairly soon,’’ but until then it’s almost a certainty the tournament will return to the CAA Centre next year as the venue has proved popular with the vast majority of the fans who live in Brampton and Mississauga. The stadium will also house a cricket academy where 24 players picked from the national squad, the developmental and under-19 teams will start training and then embark on its first international trip to Australia later this year. Singh said that his firm will likely help financially with the upkeep of the stadium and also the academy. In a lofty bid to help Canada qualify for the next World Cup the players in the academy will be assisted by top-rated coaches and also be paid $30,000 a year. “We want to make it as professional an environment for the players as possible who now have to juggle between full-time jobs and play the game on a part-time basis,” Gurmeet Singh said.

Praim Persaud, President of the Brampton and Etobicoke District League was overjoyed by the news of the City’s commitment on the stadium construction.

“ This is utterly fantastic news and a great development fort the sport of Cricket in the City of Brampton. The City’s successful hosting of the recently concluded 2019 GT20 Tournament clearly defined the need for a state of the art cricket facility in our country…all other mainstream sports have such facilities, yet despite the fact that Cricket has long since become one of the fastest growing sports in Canada..it does not..

It is more deserving to be in Brampton, as the City that has the largest Cricket League in Canada and which has constantly identified cricket as the fastest growing sport in our city… where the demand far exceeds the current facilities.

There is now definitely a huge demand for Cricket Facilitues in Brampton and in all other cities across Ontario and Canada.

Again, this is fantastic news for all players, fans and indeed the entire Canadian cricket community, as well as for those who seek and support equality for all.

Our heartfelt thanks and gratitude to the Mayor and Brampton City Council for promising that our deam will now very soon become a reality!”

In its first season last year the tournament was played in King City and the venue proved highly unpopular because of the long commute. But the league grabbed headlines across the cricketing world after it snagged Australians Steve Smith and David Warner to commit to play here. It was the first appearance for the two batsmen following that sandpaper cheating scandal in South Africa. The two were banned from playing at home and internationally for one year but were allowed to ply their trade elsewhere. The two Aussies backed off this year since they were involved in the World Cup, but have indicated their willingness to return to Canada in 2020. “We would have had a much bigger field of world-class players if not for the World Cup,’’ said Gurmeet Singh. “And some of the big names like Warner and Smith have confirmed to me that they will return next year since they enjoyed their stay in Canada in 2018.” He added New Zealand World Cup captain Kane Williamson and pace bowler Trent Boult will also be back after having had to withdraw at the last minute because of a Test series against Sri Lanka.

Even though the top international players earn only as much as $100,000 for the tournament unlike the rewards reaped by playing in India’s IPL and Australia’s Big Bash League most of the players combine their playing stint here with a family vacation. “The money does not matter,’’ said Dinesh Chandimal, former captain of Sri Lanka. “The facilities and the hospitality here have been first class and the next time I hope to bring in the family as well.”

New Zealand’s World Cup star Colin Munro was also full of praise for the organizers and a chance to play in Canada. “Canada is an amazing place to play in and visit,’’ said the hard-hitting opening Kiwi batsman. “I have met some of the Canadian players in international tournaments and I have been more than willing to pass on my knowledge to them.